2. It’s going to be required for every job in the future.

While it’s true that computer scientist jobs are expected to grow 19 percent between 2016 and 2026, faster than other occupations, computer science is not going to be required for every job in the future. Just as math or physics or even basic computer knowledge is not required for every job currently, there will be jobs that don’t require computer science knowledge in the future. However, an increasing number of diverse jobs — interior design, building theme park rides, detecting cancer, fashion design and more — are finding ways to incorporate the principles of computer science, making it useful for more and more students to at least have a basic knowledge of the subject.

3. It’s all about programming.

Programming is one tool that computer scientists can use; it is not the entire toolbox. Computer science covers hardware, data information, computational thinking and more — all areas that do not necessarily require a knowledge of programming to be successful. As the new AP Computer Science Principles class points out, computer science includes “problem solving, working with data, understanding the Internet, cybersecurity, and programming.”

4. It’s too complicated for younger students. 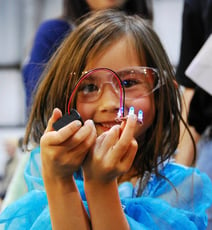 At its core, teaching computer science is often about teaching students how to think in a different way than they are used to. This can be done through low-tech options such as giving someone directions or block-based coding, or it can be done through high-tech electronics projects such as building a robot. The earlier students are exposed to computer science concepts, the higher their chances of developing an interest in computer science and pursuing it further. By waiting until middle school or high school to introduce computer science to students, you run the risk of them already having preconceived notions about what they are and are not good at. Additionally, many schools currently rely on elective courses to teach computer science, further narrowing the pool to those students who already know they are interested in learning more.

5. Computer science is hard to integrate into core subjects.

Through computer science, students learn and demonstrate standards encountered in core subject areas such as English, math, science and history. It’s easy to incorporate project documentation, data logging and human kinesthetics all in one project through wearablesor to look at math and physics through the lens of robotics.

What misinformation have you heard about computer science? Let us know in the comments below!