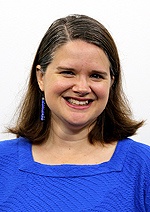 A recent study by Microsoft shows that girls' interest in STEM increases at age 11 but starts to wane around age 15. I and other librarians at the Marston Science Library (University of Florida) were concerned with how to encourage girls to stay interested in STEM and decided to create a camp for middle-school girls focusing on science and technology.

Our camp is a weeklong full-day camp open to 22 girls in grades 6–8. The cost is $100 with two scholarships available so that it is affordable to a diverse range of students. Camp activities include 3D modeling and printing, augmented reality, video production, beginning coding using Venvi.org and Unity, crafting with technology and basic scripting using Arduino.

We were fortunate this summer to have support from SparkFun, who provided the materials for our “Crafting with Technology” activities. We started with basic circuitry, teaching students how to make paper cards with conductive tape, coin cell batteries and LEDs. Paper circuits and card making are popular with students at all levels, and we’ve found it to be a gentle introduction to electricity and how circuits are set up.

The most common problem that the girls had was continuing the conductive tape across the LED and how to fold it cleanly at the corners. Once they had a working card, some adventurous campers decided to expand and create more complicated on/off mechanisms.

The next morning we reviewed the card circuits and then introduced our most challenging craft: sewing a bracelet featuring a LilyPad LED connected to a LilyTiny microcontroller and coin cell battery. The LilyTiny contains different pins that change how frequently the LED blinks (e.g., twinkling or a heartbeat). This project was based on Leah Buechley’s tutorial at sewelectric.org, and we focused on the simpler single-LED design rather than connecting multiple LEDs. 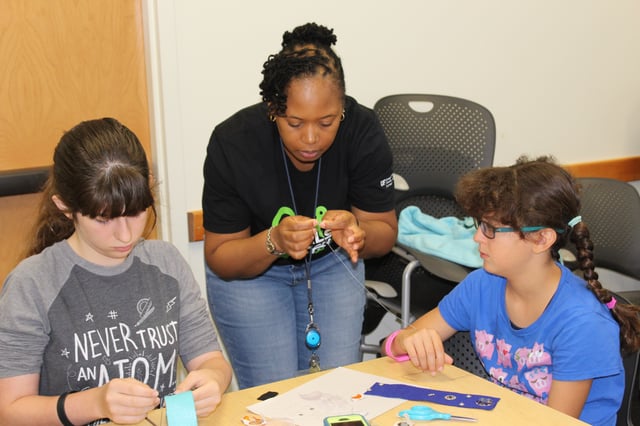 We’ve held this camp twice, this year and last, and each year the bracelet is one of the most challenging projects for the campers. The first year we had only two working bracelets out of 22 – yet the feedback from the students was entirely positive. We decided to keep the activity the second year but redo how we introduced it. This more detailed instruction led to success, with the majority of girls finishing a blinking bracelet!

Here are the top three lessons we learned:

We’re already planning for next year’s camp and thinking of how to better teach e-textiles and different paper circuitry techniques. Thank you to SparkFun for making this camp day possible!

Sara Gonzalez is a science librarian at the Marston Science Library at the University of Florida. She holds a Ph.D. from the University of California, Santa Cruz, in Seismology, and a Master’s in Library and Information Science from Florida State University. A former geophysicist, her research interests include emerging technologies in libraries and the intersection between making and scientific literacy. She directs the UF Libraries’ 3D printing service and recently co-authored 3D Printing: A Practical Guide for Librarians. Outside of the library, her hobbies are reading and knitting handspun yarn, and she is trying to figure out how to combine 3D printing with the fiber arts.