How do you bring awareness to issues that you are passionate about? Do you make a flyer? Stand outside with signs? Donate to organizations that you care about? How about art? How about combining art with some coding? That’s just what I did with this next project.

As a scout, we were always taught to “Leave No Trace” and leave an environment better than we found it. Park systems are starting to return protected areas to a more wild setting instead of a manicured experience for visitors. And as the weather warms and we start to dream of summer days spent by the pool, I am reminded of scuba diving off the coast of Jamaica. Specifically, the beautiful coral reefs that we found and the frenzy of people taking pictures and even harvesting coral.

I never realized how serious of an issue these leisurely activities are for the health of the reef ecosystem all across the globe. We love to keep beautiful things for ourselves to remind us of vacations and experiences, but we rarely, if ever, realize the impact that we have as we take these mementos. I know I didn’t until The Steward School hosted, Margaret Wertheim, to speak on the declining health of coral reefs all over the world. She is a science writer that turned her attention to coral reefs after her sister began crocheting these shapes that looked very much like coral. 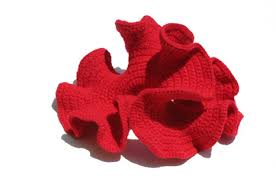 Fun fact: the crocheted coral is actually one of the only ways to physically represent a particular type of geometry called Hyperbolic Geometry. It’s akin to somebody drawing a sphere and talking about the math of a sphere before finally putting a rubber kickball in your hands. Crocheted coral is the kickball in this analogy.

But, back to the sadness of dying reefs (and ultimately combining art with coding). There are a number of factors that contribute to reefs dying - highly varying water temperatures, pollution, harvesting for knick-knack shops, and the list goes on. All of these have led to Bleached coral reefs. These spooky skeleton reefs are the indicators of a coral reef that has been devastated.

Coral eats a type of plankton/algae called zooplankton which gives coral it’s color. As the environment becomes unfavorable, the plankton disappears. If the coral cannot eat, it loses its color and becomes bleached. And coral serves as a massive player in providing shelter and food to other marine animals. Coral is a fragile thing, which is odd given their very hard exteriors.

So let’s return again to the idea of bringing awareness. Margaret and her sister started creating massive crochet coral reef installations, which began being exhibited all over the world. And as people came to see the crocheted reefs, they began to learn about the fragility of this ecosystem.

Ultimately, the sisters took a traditionally feminine handicraft (crochet) and turned it into a method for activism. And these corals are completely okay to touch!

Bringing Electronics Into the Reef

At my school, we had a big MakerFest type event centered around patterns, crochet and art. Which prompted me to want to find a way to combine coding with these beautiful coral pieces to help convey the message even further.

So, The Steward School started our own reef! And we added a twist with a few coded friends. The octopus uses an Arduino Lilypad and sewable LED lights. The Angler fish has a single green LED wired into it. 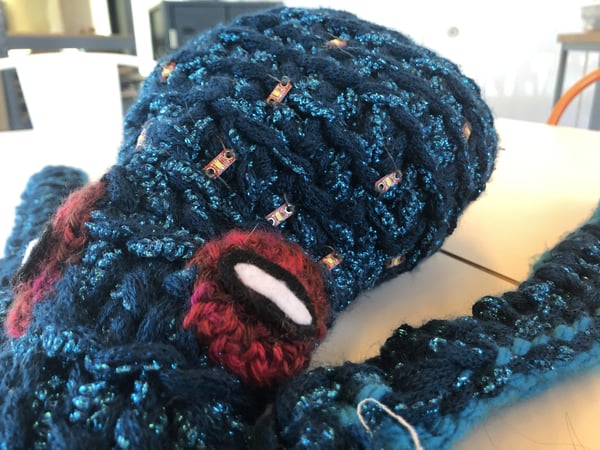 I can’t take credit for these amazing shots, or for the Octopus or the Angler fish. Those were created by my good friend and amazing coding instructor Robin Ricketts. Here is a link to some of her amazing work in Scratch.

I wanted to focus on creating a display that was interactive and used light to communicate that each time we reach out and touch the coral, it has an effect on it. But I also wanted to show what went into the display - it’s like educational Inception.

So, I set up a three-part display.

On the left (A) you’ll see a piece of yellow crocheted coral with what looks like wires sticking out of it. These “wires” are actually fiber optic filament that has been stuffed inside the yellow coral piece.

For those of you that don’t know, fiber optic is how we transmit most of our data across vast distances and is essentially a very thin plastic tube that doesn’t let light escape very easily. This is due to internal reflection. Light is how we transmit data (on and off corresponding to 1 and 0 for bits and bytes and all of that), which is a whole other article but really interesting to think about.

But I mostly just wanted this fiber optic filament because 1) It looks like it would belong on a coral reef and 2) I only needed one LED but it still created a ton of color and brightness. I couldn’t very well talk about how we need to be more mindful of sustainability and then waste energy! I tried using other materials to carry light through, but they just didn't work out that well.

You can see in the middle of the display(B) what the fiber optic bundle looked like before I passed it into the coral. It all is taped at the bottom to then fit snugly around an LED. This can be a little tough to do, but if you twist the bottom ahead of time like you’re trying to wring it out, this will keep the fibers tight against one another.

Then on the right (C) I set up a sheet of white paper above a standard RGB LED, so that you can individually see the rings of Red, Blue and Green and see how the colors are mixed.

How to get started

The idea behind the display was to have the RGB LEDs change color whenever somebody touches the coral to help bring awareness that touching coral in the wild has a lasting effect on it.

This was the first time that I had tried to create a “touch sensor” that wasn’t just pushing a button. Whenever I don’t know how to do something, I start out by searching on Instructables and Sparkfun to see if somebody has already done it. Sparkfun always carries some great tutorials and many products that could sense touch.

I ended up opting for building the circuit instead of buying a breakout board so I could use it to teach students about how this technology works.

This process of starting with an idea that I didn’t fully understand how to complete illustrates how I believe all educators should learn Arduino and new computer science concepts. Start with a fun idea or project, figure out what skills need to be acquired to complete the project, then acquire those skills. Learning code for the sake of learning doesn’t typically take us very far, but learning it for the sake of completing a desired project helps make it real. It also helps when you promised the project would work and can’t back out of it!

The code and circuit were pretty easy but relied on Capacitive Touch Sensing. This is the same type of technology our phones use to determine that we touched a piece of glass and to determine where we touched it.

The picture above does a great job of illustrating how this works on your phone. The terms are a bit confusing if you haven’t taken a Circuits course, so see below for my circuit diagram. It’s all just a bit of tin foil and a huge resistor, 10MOhms to be exact.

The circuit from pin 4 to pin 2 with a large 10MOhm and tin foil corresponds to the circuit above that explains how Capacitive Touch Sensing works. It’s that simple!

In the above circuit, the Arduino sends out a bit of electricity on pin4 and receives it back on pin2. The change in this electricity received on pin2 is interpreted as somebody touching the circuit, which then lights up the LEDs in the picture above.

Getting it to work

Like I said above, I always turn to Instructables and Sparkfun to help me get started. I managed to find this instructable to help me out which does a great job explaining how to get things working. The general takeaway is that you need a large resistor (over 1 megaOhms) to make it work but 10-40 MOhms is best because then you can even sense the Electromagnetic Field coming off of each person. (No I don’t mean an aura, I mean an actual EMF Field.) This would allow you to see a signal as somebody gets close to the tin foil, without having to touch it.

Using the Arduino library in the Instructable, I managed to set up a few “touchpads” for people on the table, in front of the coral display, that said “Touch Me!” and as they did, the code would randomize the RGB values and send that to all of the LEDs pictured in A, B and C, turning them all the same color. So, as people tapped the “touchpad”, the coral would immediately change colors - signifying the effect humans have on coral in the wild when they touch or harvest it. The color itself didn’t mean anything, but by changing the color, I was able to show that touching the reef had an impact.There was also a printout explaining what the display is meant to signify so people didn’t just think it was for fun!

The code is relatively simple. If you want to make your own coral reef or capacitive touch project, you can find the code I used here.

This whole project created a lot of value in many ways. For me, the educator, it led to learning new science and technology about how things work, as well as forcing me to live in the nebulous zone. The nebulous zone is where our students almost constantly live - not sure where to go next, what the right answer is, and where to find answers. Teachers always need more time in this zone because the learning that happens here is much more powerful than following a guide that has no chances for failure. Feeling comfortable here sets us up for success in the classroom to make students feel at ease in not always having the right answer.

Secondly, this project demonstrates using CS and coding, in tandem with crochet and other materials to bring awareness to environmental issues. Getting out of the silo of using technology to create more technology not only shows how coding can be used in the real world, it flexes the parts of the brain that think laterally instead of linearly. Lateral thinkers are much more able to make connections and think in innovative ways. But like all things, it takes practice!

Word of warning - students will not gravitate to this immediately. In my experience, students have a hard time thinking laterally, when school is very linear. So don’t get frustrated if they don’t always have amazing ideas about how to combine three very different topic areas. Give them time!