Happy Holidays one and all! One of my most vivid memories about this time of year is the idea of warmth - sitting by a fire with a hot cup of tea while the family tells stories and enjoys each other’s company. Joke's on me though - my fireplace is nonfunctional and my apartment is about as cold as an igloo. But, my other favorite thing about the Holidays is the spirit of giving. I’m not necessarily talking about opening your wallets (but I do accept donations!) - I’m talking about the idea of helping out strangers and a general air of camaraderie.

So settle in and I’ll tell you a story of high schoolers helping others, finding their passion, and giving me one of those “Everything’s going to be okay in the world with kids like these” moments which I think we could all use.

Every year, myself and a team attend the Virginia Commonwealth University HealthHacks Hackathon. I even wrote pretty recently about our cool Concussion Detecting Helmet that we made last year. For me, this event is the highlight of what my students can achieve. I have two students who returned from last year (and have been every year) who are now Juniors and begged me to let the group stay overnight. Plus two more rockstar students who I’ve had the chance to work with closely for the past 3 years. (Maybe a follow-up to this post is tracking changes in their growth mindset, huh?) In the past, I made them go home around 11pm Saturday night and return Sunday at 6am so they could get at least a bit of sleep and shower. As an educator, it’s so much easier to not have to watch over kids when you are sleepy. But, with myself leaving Steward at the end of this academic year, I figured I owed it to them to stay overnight so we could really push the limits of what we could achieve.

This year, the focus for the HealthHacks was on Assistive Devices - partnering with the Department of the VA to help Veterans. Anthem was also a sponsor and so was OpenEMR - definitely check them out, they are an amazing group of volunteers trying to open Healthcare up to reduce costs. Sidenote - I’d also like to give a big shoutout to VCU for hosting this every year, it’s a lot of work and I’m super proud of my Alma Mater for doing this.

As in years past, the Hackathon started with an hour-long pitch session from the sponsors and veterans themselves about some of the daily challenges they face. Each one more inspiring than the previous, we really wanted to do something for these brave souls who risked life and limb for their country. And as before, we worked as a group to identify what problem we would pick. This is no small task and actually took us about 6 hours. Yep, you heard right. Let me explain.

If you’ve read my previous two blog posts (part 1, part 2), I’ve been talking a lot about Design Thinking and its’ use in helping students navigate problems. We followed the process and started right off with phase 1, Research. We researched a number of the problems and started to navigate towards one specific one - able-bodied adults who have multiple prescriptions and have trouble remembering when and how much to take. I was surprised my students wanted to tackle this because I know that this is a highly saturated market. There are many options at many different price points.

As you can see, these are just some of the physical products. The main price changes occur at two levels: Alarms that can be programmed jump the price from $10 to $80; and Verification that you took your meds, and alerts caregivers if you don’t, jump it to around $800. So, we had to be very careful about what we chose to include in our project. Luckily, the sponsor of the project was right around the corner. So we booked time with him to gather more primary research about what features he would want and what ones he isn’t interested in. At first the students thought it was cheating, but as anybody in business knows, we’re just trying to satisfy the client and have continual check-ins. This was very key - don’t spend hours and hours building and then check-in. Check-in first, and often afterwards.

He gave us some very specific needs:

Number 4 proved to be one of the most important pieces of information. There were 8 other groups working on this same problem! Some even said they had already been working on it for a different school project and had a head start! But almost all of them were focused on trying to sort in real time. Through Design Thinking, we listened to our sponsor and didn’t add features that he didn’t want. That may seem trivial, but feature creep is a big deal!

Fast forward 6 hours and we have gone through multiple ideation rounds, adding features, subtracting features, talking about physical designs, user interaction, customizability and more. At one point we even had a feature that the user could lift the pill box and the proper pills would tilt out, with a little jet of water to help you swallow them. I’m still not totally convinced that this isn’t an AWESOME idea. And again, I played role of Project Manager, offering advice and expert knowledge, pointing out potential roadblocks, helping them organize their thoughts, and trying to keep a poker face about my opinions. Let me share a tool that I love to use for ideation and sorting:

Notice the rocket ship? That’s mine. Part of the role of an educator/project manager in this line of work is to lead by example. Letting all ideas get out and live there helps the students all feel heard and valued. Plus, it’s a pretty sick rocket ship, if I do say so myself.

Putting it All Together

Fast forward to 8 am the next morning and what do we have? The ProCurable Pill Dispenser. 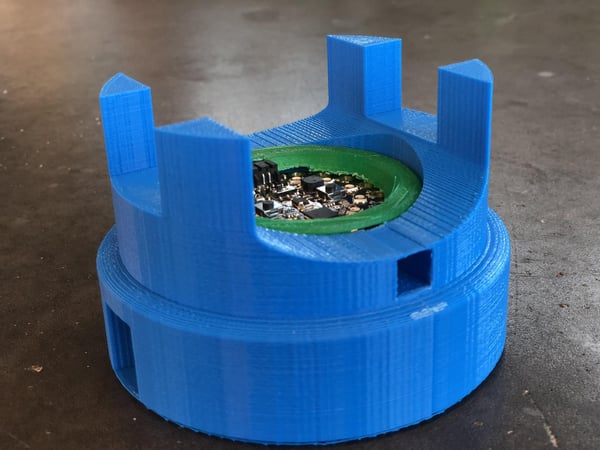 One student designed the 3D printed housing using TinkerCAD. You can check out a great video of all the parts below. Another student wrote the code for the alert system and two others worked on the code for the verification system. Let’s take a peek under the hood.

Presenting to the Judges

I think this is where most people would start panicking - and guess what, I did! I was super worried because my team was so laid back, so lackadaisical about pitching and hadn’t really practiced that much leading up to lunch. I could see doom fast approaching. We would work so hard and get so far and then end up tripping over our shoelaces at the finish line. Boy was I in for a surprise.

This team nailed it. They were jovial, approachable, educated, honest about their mistakes, and confident. Then it hit me. We’ve done this before. Most of them have done this at least twice before, at this very event, and countless more times in either my course or other special projects at the school.

When they told us the rules of judging, we all thought they meant there would be 3 consecutive rounds, and if you got a visit in the second and third rounds, you would be in the final picks. Unfortunately, we never got a second or third visit. I chalked it up to judges just following the rules, but it did sting a little bit. (This Hackathon is meant for college students and you have to be 18+ to win.)

So, I congratulated my team on a stellar job and sent them home. I was still immensely proud of them - I just figured others had nailed it more. All of them left. Then, one judge approached and asked where my team was. I defiantly told them I sent them home since we didn’t make finals so my students could do their actual homework for the weekend.

This judge audibly gasped. She informed me that there were not 3 consecutive rounds, just not enough judges to visit everybody in the first round. She had voted my team on to the final round. She and others told me that many groups had failed to think about things such as price point, individuals with disabilities and more. They all tried to over engineer it and sort all of the pills in real time. Most had turned into monstrosities that were 4 feet wide. Sure we didn’t have a perfect project, but we planned ahead and thought things through instead of getting tunnel vision on the engineering.

I frantically called them back in case we had to present in the final round. Only two could make it back. After what felt like an eternity, the judges called everybody into the Auditorium. Instead of a final round though, they started awarding prizes. Third place came and went. Second place came and went. I was sweating bullets - did we really win first place? Could it be? First place came…..and went. Another team got it. I felt so embarrassed - I had asked parents to turn around and drive their students back, just for us to not even place.

Then one of the organizers asked “Is the high school team still here?” to which our few hands raised half-heartedly. My spirits raised a little at this but I still expected to hear a shoutout that we were here and a “Keep at it! Maybe next year, champ!” We got something way different.

They told the entire audience that the reason it took them so long to decide on winners is because we threw off their scores. We had received some of the top marks among all 30 odd groups. But we weren’t allowed to win. But judges were arguing that we should. Finally, they settled. We would be the unofficial winners of the entire Hackathon and 2nd place would receive 1st and so on. I couldn’t believe it. One of my students put his head in his hands and lamented “We could have won Xboxes if I was just two years older!”

Four high schoolers worked through the night and crushed some college level engineers at their own game. Disney, I’m waiting to hear from you about a movie deal. My only request is that Ryan Gosling play my character. Please and Thank you.

There were so many lessons learned here, but at the end of the day, what matters is the elation of these students. We can’t always win, but when we do, let’s just live in the moment and enjoy it.

Thank you again to VCU for hosting this event and providing real world problems for students to tackle. This spirit of helping others is what makes engineering tantalizing. Most engineering is taught in a void and seems far removed from people. But engineering is about solving problems, not just making cool things. And it’s about making a difference. And we could all use a little bit more of that connection and purpose.