What a Simple Blink Sketch Can Teach Us About Vision

Happy New Year and good tidings and all of that other stuff people typically wish you! I don’t know about anybody else, but my least favorite thing about the New Year is the constant question of what I did on my break. I need to just make a shirt that says “Didn’t do anything except gain weight and check Instagram until I got bored, then opened Twitter.”

I always make grand plans. This year it was something like this:

But as I’ve said before, a modest delivery is much better than a grand proposal. And my delivery is quite modest. I’m going to take us back to the “Hello World” of Arduino. For those of you not familiar with “Hello World,” it is typically the intro or starter code that somebody will first see when learning a new language. And typically it involves writing some code to print out “Hello World” on the screen.

When first learning Arduino, we start with learning to write code that blinks an LED, called the “Blink sketch”. A sketch in Arduino is just a saved program file. If, like me, you have taught many teachers and students Arduino, you have opened the Blink sketch hundreds of times. It may even haunt your dreams in some kind of weird way where endless windows of the sketch pop up and you can’t close them fast enough. Not that I’d imagine a scenario like that….and then create a gif of a scenario like that….

This lesson won’t actually make you a better coder through fundamentals, even though every movie and book about skill always highlights the importance of them. But we can use this intro Blink sketch to teach the anatomy and physiology of the eye!

This is a great way to use coding and computer science (CS) to do more than just teach your students how to write basic code. I always try to work with teachers to help them realize that coding and CS shouldn’t be taken at face value.

When we teach code for the sake of code, we really miss the target. It’s just like teaching math without ever using real world examples - it gives rise to people who claim to just “not be a math person” which we know isn’t an actual thing. IF you disagree, please go ahead and see this post of mine about why you’re wrong.

How Fast Can You Detect?

So, let’s talk about the LED. Almost every first project involves learning how to control the rate at which an LED blinks. Changing the delay will change how quickly the loop runs (how quickly the LED turns on and off). If you bring the number in the delay command down to somewhere within 8-13 milliseconds, you will eventually not notice the cycling of the LED, it will just look like the LED is constantly on because your eye can’t detect how quickly it is turning on and off. When I run this exercise with people, I ask them to find the lowest number at which they can just barely detect the “blink.”

This is where things get interesting.

Before we move on, you need to try and do what I just described. If you’re already familiar with setting up and running the Blink circuit and sketch, you can skip the section below. If this is your first time using Arduino or you’d like a refresher, please see below for instructions.

If you’re familiar with setting up a Blink sketch, you can skip this part

Set up your blink circuit. See below for a circuit diagram.

Grab some code from the link above, copy and paste into your Arduino IDE and choose your port. Here’s a quick Youtube video I made using Screencastify to show you how. While this video doesn’t explain what the different bits of code do, you can find plenty of other resources out there to explain that.

As you put in different values between 8 and 13 for the delay, it is okay if you see some wavering of the LED, or what looks like small little blinks. It doesn’t have to look completely solid. I’ve used 11 for my delay and I can still see a bit of a flicker but not distinct on/off periods.

Now comes the fun part! Look at the LED straight on. Not quite as close up as this image but you get the idea. From here, you shouldn’t notice any blinking, or perhaps just a tiny tiny tiny bit of flickering.

Now, look at some point about 6-8 inches to the left or right of the LED where the LED is still in your peripheral vision. Give yourself a moment to adjust. Stare straight ahead. You should start to notice that the LED is blinking! 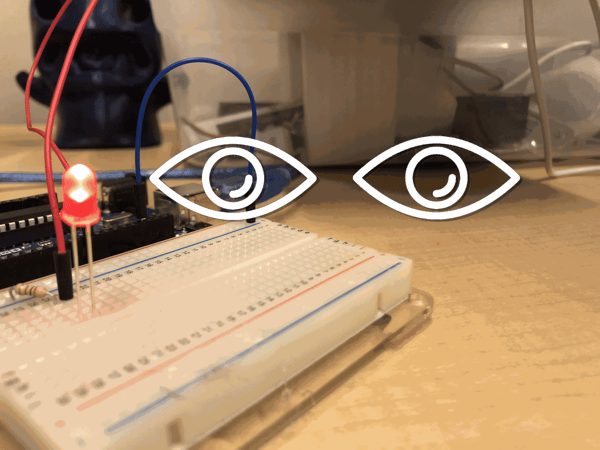 What Does It All Mean?

This demo actually shows the different types of vision and what they are mainly responsible for! Whenever we think about our “vision” we typically equate that to whatever we are trying to currently focus on. This is typically referred to as “Central Vision” and has a number of characteristics that we use everyday:

Then we have our Peripheral Vision which is responsible for:

So by changing the delay to a very small number, we can see where our central vision and peripheral vision differ.

You can choose to end the lesson here if you’d like. This does a decent job at explaining the different types of vision and how we can use a bit of code to demonstrate them. The part below takes a much deeper dive into eyesight, and other factors that influence our ability to see. Be warned, there is deep nerd-ery ahead!

So, you might be asking yourself, how does the delay rate come into this? If central vision can still detect motion but peripheral vision is better, why can my central vision suddenly not detect that motion? Two reasons! 1) Rods and Cones and 2) Framerate

Much like a light sensor or photoreceptor you might buy from SparkFun, the back of the eye also has photoreceptors. However they have two distinct shapes - rods and cones. Our Central Vision has mostly cones with some rods. (Except the fovea, which is our real, true central vision - it has no rods at all.) The Peripheral vision has more rods, which are responsible for night vision and detect motion much more easily. Two types of sensors to do two different things.

If you’ve been around computers for a while, you’ve heard of framerate as the rate at which your screen refreshes. If you’re a hardcore gamer, you’ll know that that the more taxing a game is on your processor, the slower the framerate. Slow framerates makes a video sequence look choppy, and almost like poorly done stop motion animation.

But here’s the cool thing - our eyes also have a framerate. I remember when I first found this out in one of my Biomedical Engineering courses - I was blown away. I never thought that my eyes had to “refresh” the image in my brain - I just assumed they were always “on.” But it turns out that even our perception of motion is just a series of images put together by our brain to recreate how the thing we’re watching actually moves.

Our eyes even move in a series of small movements instead of a fluid motion. They’re called Saccades or Saccadic movement and look like a series of stairs or square waves. When we read text, we don’t move smoothly, our eyes “jump” to each word. Below is a demonstration of the jumps and the relative time we spend on each word. For anybody confused why the graph moves upward, the unseen y axis would be position on the page from left to right

This is why our delay has to be somewhere around here for this experiment. Any higher and your central vision will be able to detect the blinking. Too much lower than 8ms and you won’t even be able to detect it with your peripheral vision.

Another awesome way to perceive this is to use the Slo-mo mode on your phone. My students discovered this one actually. Without even filming, the Slo-mo mode will slow down the blink that we typically can’t see and you’ll be able to see the blink happening.

Here’s a little video I put together to demonstrate this. (Ignore my gross hands, please and thank you.)

Here are some cool facts to wrap things up!

Let this serve as an example of using CS in the classroom to help spark a lesson and give some context to what we teach. This is obviously a very specific lesson, but one that I found semi-accidentally. In reality, I teach this lesson just as I’m taking students through the basics of Arduino and cover this phenomenon in about a 5 minute tangent. I don’t discuss rods and cones, or the subliminal messaging scares, or saccades. But I wanted to provide that for you.

Lastly, I’d like to take some time to describe in detail the student response to this exercise. As many of you know, some students think CS is boring or too hard and not exciting. This lesson is specifically to get them curious as it requires very little actual CS work and there is a large payoff -- many of them like to compete to see how “good” their eyes are. Other takeaways and lessons learned are:


The not so good:

As always, I hope you all find it useful. Find me on twitter to ask any questions.