Blog Home / getting started / What are Diodes, Thermistors and Shields

What are Diodes, Thermistors and Shields

A large part of why I undertook this “What is a…” series around electronic components is because I wanted to better understand these components myself. Up until this point, the pieces that have been covered (jumper wires, breadboards, resistors, etc) have been components that beginners are likely to directly come in contact with. With this post, we will be taking a look at three components beginners are unlikely to encounter directly, but understanding them will lead to a greater understanding of electronics overall, the boards they may already be using and expand their abilities to more advanced electronics.

You’ve likely heard of diodes in the form of LEDs (light emitting diodes), but what exactly are they outside of an LED? Simply put, diodes allow electricity to flow only in a single direction. Diodes have two electrodes, an anode (positive) and a cathode (negative), that give them polarity. When positive voltage is applied to the anode, current is allowed to flow through the diode. While LEDs are probably the type of diode you are most familiar with, diodes come in a variety of configurations that allow them to be used for many different things, including converting alternating current (ac) (wall plugs) into direct current (dc) (used in electronics) via a rectifier diode. 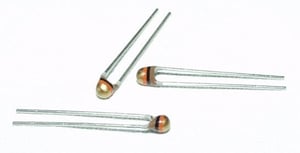 Looking to measure temperature? You might need a thermistor. For those of you who enjoy a good portmantou, this one’s for you - it’s a combination of the words thermal and resistor. Thermistors are a special type of resistor whose resistance varies significantly with temperature, making them handy for measuring temperatures. Found on the SparkFun PicoBoard, thermistors require the use of the Steinhart-hart equation to convert sensor values to a real temperature that you’ll recognize.

When prototyping, boards such as Arduino provide you with a lot of power and abilities. However, when you want to start adding things such as IoT, motor drivers, GPS and more, things can get complex pretty fast. Which is where shields come in. Shields reduce all the complexity into a single interface that can be fitted onto the pins on your original board and immediately add functionality. Often, shields also include programming libraries to make the programming side of things easier as well. To give you an idea of the variety of things you can simplify with shields, take a look at all the different shield options we sell.