In a recent camp that I did with the amazing BLDG61 Makerspace at the Boulder Public Library, we explored some experimental concepts with Arduino and low-cost radio frequency transmitter and receiver pairs. 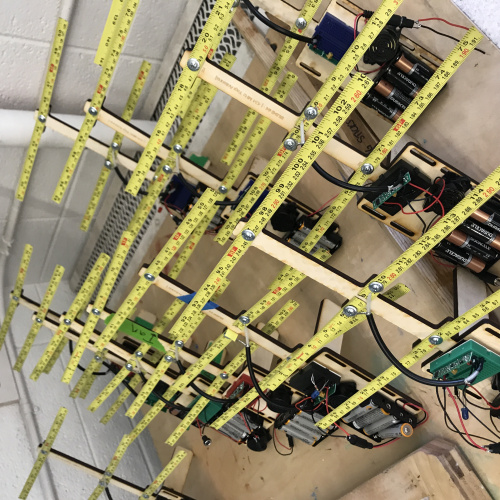 This is a great starting point for the tone command in Arduino - my most frequently picked note is 440 Hertz, or concert A. Below is some code that uses concert A as a blink-like example. We send the concert A tone through a radio transmitter, conveniently sold by SparkFun. When we pair that with a simple receiver and battery pack coupled to a speaker, we have an audio radio direction-finding unit that can be attached to a Yagi antenna. Yagis are a source of much radio frequency voodoo, but in essence, they are directional antennae that broadcast and receive in a line of sight.

We built our antennas out of laser-cut plywood and old tape measures, a low-cost and super fun classroom project. The files can be found here: (file download).

Next we followed some pretty simple wiring examples, the details are under craftninja’s github.

The code for this is really simple!

Next, you can build a simple receiver that doesn't even need an Arduino.

From here, hide your Arduino and send a team searching. The simple act of intersecting two lines of strongest signal should give you a location of the "fox".

Have fun with this and let us know how it works for you!