Over the past year and a half, SparkFun has been working with No Starch Press to release our second book. We're so excited to announce that we just got our first copies from the press! The SparkFun Arduino Inventor’s Guide is here!  This book was written to help get you started working with electronics, programming and making cool things. Anyone can be an inventor, and this guide will walk you through a series of projects that combine common materials with the powerful Arduino to inspire you to start making your own inventions.

What Is This Book About?

At the heart of this book is the Arduino, an open source microcontroller board that you can program to control LEDs, measure temperature, react to light, interface to GPS satellites and much more.

Arduino is the ultimate tool for makers looking to add control and interactivity to their projects. It is a perfect way to add "smarts" to your next invention!

A quick search online for "Arduino projects" returns millions of hits. There are thousands of projects and ideas available on sites like Instructables, hackster.io and YouTube. That shows just how many makers out there are using the Arduino.

At SparkFun Electronics, we encourage people to experiment, play and tinker with common household items by altering and integrating electronics components, sometimes known as hacking. This book will teach you some core electronics and coding skills that will help you invent, and we hope it will inspire you to build something new and unique with materials you find around your house.

The projects in the book are all designed to be made with the parts in the standard SparkFun Inventor's Kit, a little cardboard, a craft knife, some hot glue and a few other household materials. Here are some example projects from our book. 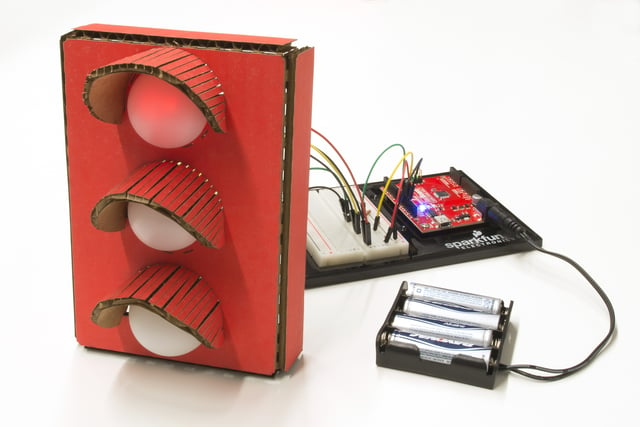 Chapter 2: Stoplight for your house 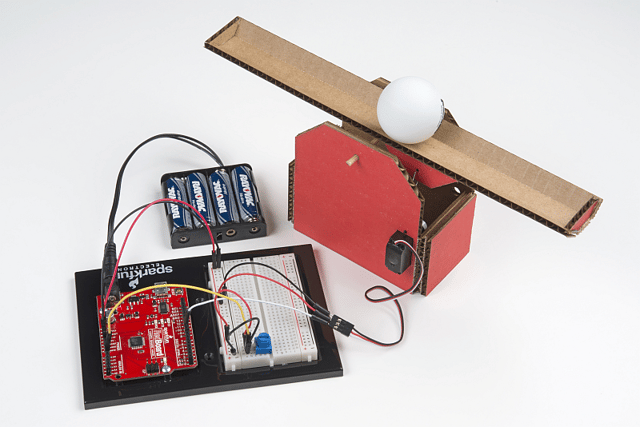 How Should You Read the Book?

The book is not a book to read for theory, though we are hoping that you will learn a lot from it. This book is designed for doing! We see this book as a first step for many to take down the road of inventing the projects of their dreams — and through building some of ours, to learn some tips, tricks and skills necessary to be able to bring those ideas to reality in the form of rough prototypes.

This book should be read with a tool holding it open to a page that may be a little greasy or singed from a blow torch. You should read it through a pair of safety glasses with a soldering iron in one hand and a grip of wire in the other. You may have bandages around your fingers or a callus from using a craft knife, and you won't be able to see your floor under the cardboard scraps strewn about. This book should be read not through your mind, but through your hands; by building the projects in it and allowing yourself to be inspired to hack them, modify them, make them better! There is no greater honor to this book in our minds than for people to improve the contents of the book.

What Was the Inspiration for the Book?

The projects in the book came from a number of conversations, workshops, whiteboard sessions and even arguments with friends, coworkers and other educators. But, the idea of combining Arduino and electronics with simple craft supplies for me (Derek) can be tracked to a single moment in time.

About a year before I started working for SparkFun, I co-taught a two-day workshop with Jeff Branson at a local hacker space in Portland, Oregon. The outcome/final project of those two days was a beautifully crafted wooden balance beam controlled by a servo motor and an Arduino. A ball bearing was placed in a groove on the beam, and you controlled the servo to move the beam back and forth and keep the ball bearing on it.

After that workshop we went to the Oregon Museum of Science and Industry (OMSI) to give a small presentation and teach a quick workshop. I was going to use the balance beam as an example of a great Arduino project, but actually had forgotten it at home (DOH!). Out of desperation to be able to talk about the balance beam project, Jeff and I rebuilt one from cardboard out of the recycling bin and materials from the coffee table in the back of the room. In fact, that hodgepodged cardboard balance beam worked better than the beautiful two-day project (go figure!). OMSI asked for the cardboard version to put on display. I haven’t seen it since. But what I got from that experience was an almost oppressive inspiration to build projects from the materials that I have around me, in a quick and ad hoc way. For the past six months of my teaching career, it was all that I taught in my classroom.

Since then, I have been able to reflect on why that moment was so powerful for me and my students. And finally, it inspired Brian and I to write this book. What we discovered was that these projects provide context!

What most people lack when presented with Arduino in the classroom — and to be honest, when learning something new — is the answer to the question, “When am I ever going to use this?”

It was always my goal in my teaching career not to ban that question from my classroom, but to make it so overwhelmingly clear how someone would use a tool or material that the students just wouldn’t ask it. For using Arduino in the classroom, pairing it with cardboard, tape and hot glue was that overwhelming answer.

My students built lamps (light sculptures), robots and egg drop/launch devices, but my personal favorite was a simple project prompt to design and build a stoplight (Chapter 2 in the book).

I asked my students to build a simulated stoplight with LEDs on a breadboard as an assignment. About 60 percent of the class did it, and 40 percent just watched the other students do the work. Then something happened; I altered my prompt and asked students to really build a stoplight. Students used drinking straws as armatures, ran wires to the LEDs, added ping-pong balls as lenses, and at the end of the day had working stoplights.

And, without any additional suggestion, they then started combining their stoplights to build intersections and asking one another (not me) how they could detect a car, or how they could choreograph the lights correctly. Soon, I was teaching a lesson on what a reed switch was, programming structure, serial communication between two Arduinos, and more. This was all happening with 32 middle school students feverishly taking notes. In my classroom I nicknamed the projects “cardboard hero projects.”

All of that story to say that when I got to SparkFun my first job was to document my previous content work in and out of the classroom into what became known as HotSheets. HotSheets are single-sheet project tutorials that a teacher could hand a student to provide just enough instruction to make that student “dangerous.” My first set of HotSheets were around the programming language Processing. The “SparkFun Guide to Processing” was the culmination of those HotSheets a few months after they were completed. The second round of HotSheets consisted of the cardboard-based Arduino projects that make up a good deal of this new book.

It has been an amazing almost five years since that first “cardboard hero” project that was literally invented out of necessity. It has been an honor to bring this book and the projects that it is made up of to fruition with Brian, who has been the tip of the spear to get this book to its completion. Without him the projects would just be desk fodder for another five years.

Writing this book has been an incredible journey for all of us at SparkFun. We have really teased out a learning trajectory that we feel layers itself gradually from project to project. This is intended to be used by classrooms, individuals and anyone just curious about where to get started. The world of Arduino is massive. We hope that the projects and the context we show in this book give you a place to start. And, if we've done our job well, it will help you unleash your inner inventor!

This post was coauthored by Derek Runberg and Brian Huang.