Thoughts on the National Boy Scout Jamboree...or, a blog post in which we will not all agree.

I’m on a plane home from the 2017 National Scout Jamboree in West Virginia. By now I’m sure the news has spread far and wide about the presidential address. But, this isn’t a political diatribe, nor is it a critique.

A good portion of my life is devoted to giving the resources I got so freely and generously back to the community at large. I am not ashamed of my seemingly cult-like devotion to open source, embedded hardware and code as literacy. I am lucky to have the freedom SparkFun affords me to deliver what I think is an important message, and I do my best to be a good steward.

About a month ago some friends at MakerED and Cognizant asked me if SparkFun could lend a staff person to man a new makerspace at the Jamboree. This experiment is connected to the STEM Scouts, a coed program of the Boy Scouts of America, and focused on bringing STEM learning into the scouting model.

We've been asked to attend a Jamboree before, but this was different; it was a group of folks I knew, who were trying something different and who all were national stakeholders in making and emerging education and technology practice. I wanted in. 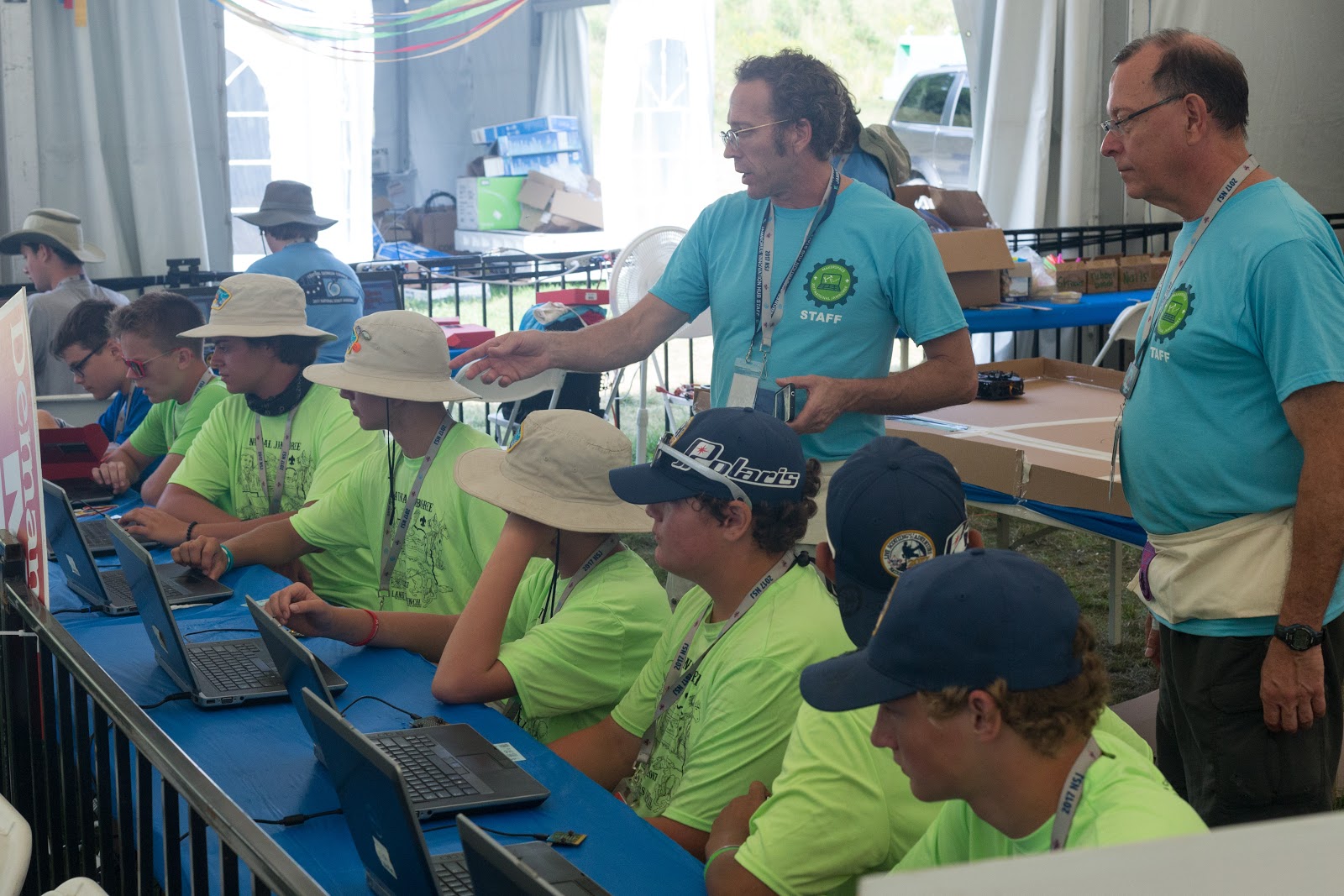 Say what you may about the Boy Scouts: it's a single-gender organization; it has a diversity problem; gender roles and service have been issues; it's a bastion of privilege. The list can and will be added to.

That's not why I'm here. That stuff is easy; we can all offer up righteous critic, and it may be valid. I'm here because the people doing this work are in the trenches of the STEM crisis in this country. They are trying to do something about a problem.

There are ten thousand volunteers working nonstop in a week at the Jamboree. If you figure a hundred hours a week per volunteer, it totals about a million volunteer hours. They are volunteering their time with other people’s kids to try to do something to make things a little better. Yeah, I get it's not perfect, and sometimes it is even...well...ugly.

I spent four days with the makerspace crew –  lots of liberal, educated makery types. We all kept going back despite our misgivings. After Monday night's address I thought I would go home. I couldn't look at kids after the admittedly disturbing behavior I saw.

Not one person in the makerspace gave up on the mission. Some of us were hurt and disappointed, but we went back. And we worked. 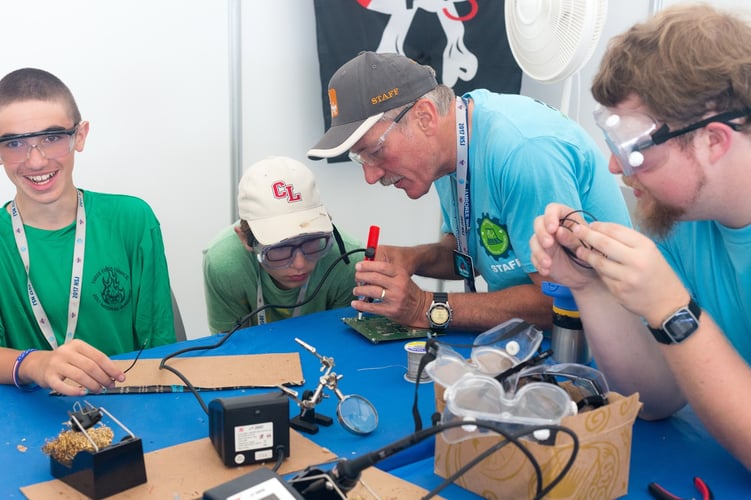 Making is hard sometimes. “It never works on demo day” is an oft-repeated phrase at SparkFun. But we saw kids make really cool stuff  and come back day after day. My last day there I had a young man blow my mind by reprogramming the printer unit from an old calculator with a micro:bit.

Kids sewed purses for their moms and sisters and made light-up blinky stuff for their backpacks. They printed T-shirts, and they flew and programmed drones.

And they met new people – sometimes people different from themselves, people who might look different or represent different views, people like me.

In the end, we made some stuff. And we laughed, and we shared food, and we struggled. And we worked together.

I was struck by the amazing amount of programming there: robotics, electronics, model rocketry, biotech, environmental monitoring, welding and construction, programming...it goes on and on. 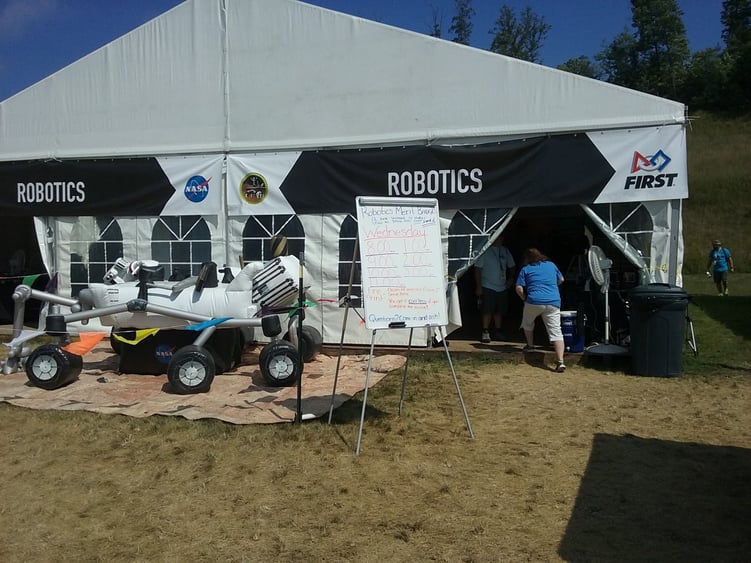 There is also a huge military presence; it is at the root of the Scouts, and it's part of their thing. As I wandered through what for me was an alien landscape in some ways, clicking photographs and watching kids, I was amazed and sad and hopeful and scared and grateful – all at once.

I love the United States – just not quite in the screaming eagle, love-it-or-leave-it way. But probably more in the way the letters between John and Abigail Adams reflect conflict in democracy and the attempt at construction of a more enlightened and equitable society. I make it a point on the Fourth of July to remember how John Adams and Thomas Jefferson died on that same day in 1826, having resumed a friendship after a bitter dispute. That is the kind of citizen I strive to be.

I wandered around the Jamboree and worked with kids and talked with my peers and disagreed with my peers. After all this and some reflection...if the invitation is extended, I think I may go back. 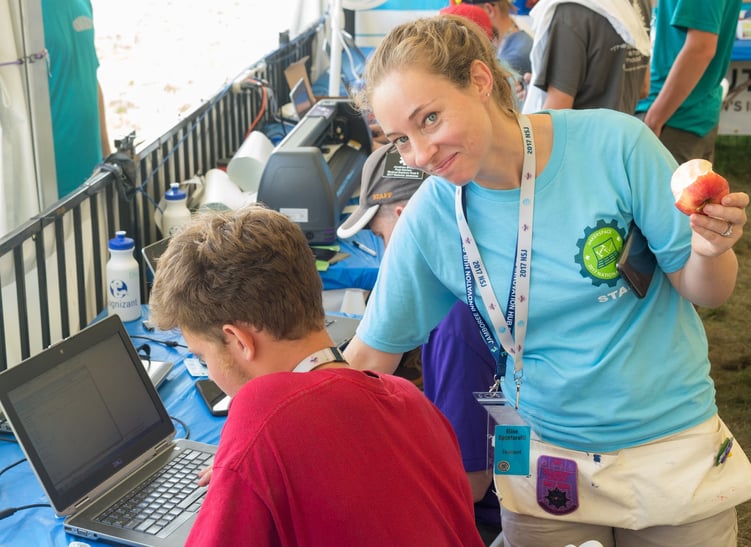